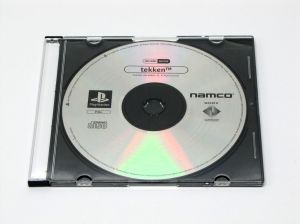 The original Tekken needs no introduction, but I'm going to give it one anyway; one of the earliest 3D fighters and a direct competitor with Sega's Virtua Fighter, Tekken might not have been the nicest looking fighter then (and especially not now), but as much as it took from its contemporaries (colourful characters and combo map's to master being just a couple) it took a completely different tact in the way it played by mapping each of the four face buttons to the characters' four limbs, giving the game a more freeform style of play and allowing combos to flow more smoothly through each other, allowing for fast paced and intense matches.

The learning curve is quite steep and the game definitely shows its age in some ways, but for a first game/prototype of a new fighting game formula, Tekken remains a very playable fighter and a worthwhile addition to anyones PS1 library.