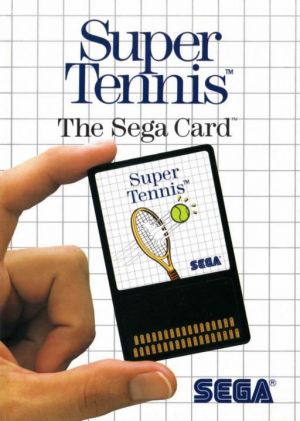 It really doesn't get much simpler than Super Tennis, but don't let the basic nature take you for a fool because this happens to be one of the most celebrated games for the Sega Master System. Not only this but perhaps one of the rarest available on the Sega Card format.

Play on your own or with a friend, in a head-to-head match or even team up against the computer in an exciting doubles match. Super Tennis really doesn't mess around, just pick your favourite from four different surfaces and get playing right away. If only sports games were this straight forward today!

Please note: This version of Super Tennis makes use of the Sega Card format and is only compatible with the first-generation Sega Master System which feature a card slot. A standard cartridge version is also available here.

I got to be honest I wasn't expecting much from Super Tennis. Sega have a good reputation when it comes to games of the genre, but the screenshots for this one didn't fill me with confidence... It looks like an old Atari game or something.

Don't let that fool you though because Super Tennis is awesome sauce to the extreme! Be warned though, you will need an original Master System to play this version as it comes on a card and not a cartridge. I did have one, but most do not.

That being said you should grab an original model anyway, even if you don't like this game, because the video output is a million times better.
by Jeroen 31st July 2013
Leave Review