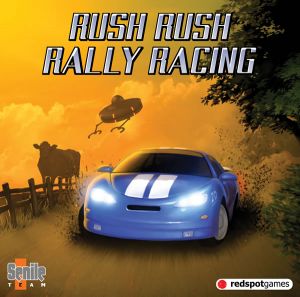 Retro racing fans rejoice! A brand new Dreamcast game in 2009? Yes, it's true! The folks over at Senile Team have produced what is arguably one of the best top-down 2D racers of all time with Rush Rush Rally Racing. In their own words, RRRR features "no sponsored cars" and "no realistic environments" but without these constraints they have been able to concentrate on what really matters - making the game "just plain old fun!"

And that's not all, racing fans... Rush Rush Rally Racing is region free. Play on your PAL Dreamcast, your American NTSC Dreamcast, or even your Japanese NTSC Dreamcast. The choice is yours alone, but whatever you choose, RRRR will play superbly and without issue. Prefer to play using the VGA cable? That's fine, R4 supports it flawlessly. I really don't know what more retro racing fans could ask for!

I actually bought RRRR a few years ago along with a large amount of other indie games, and for some reason I never got around to playing it until recently. Boy was I wrong to hold off on this little gem! Nothing I say will make you change your mind, but if you truly enjoy a decent retro racing experience like Micro Machines for the Mega Drive / Genesis then you could do a lot worse than Rush Rush Rally Racing. I recently got the Wii version for around half the price of the Dreamcast one, but the experience of playing on a real Sega console is impossible to replicate. Jorge is one happy human right now.
by Jorge 5th July 2013
Leave Review