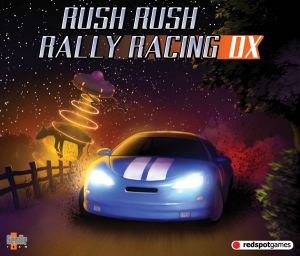 Forget sponsored cars, realistically rendered 3D environments, meticulously crafted engine sounds, and all that nonsense. This is a truly old-school 2D racer like those we know and love from the 16-bit era of the 1990s!

All this on the Sega Dreamcast? You can hardly fathom it, I can tell... But you'd better start believing because Rush Rush Rally Racing was created just for you, and it positively begs to be played. You won't be able to put it down!

Like to play using the VGA cable? The geniuses at Senile Team have you covered. NTSC/PAL? Both are options here, with no region locks in sight. In fact as with all after-market Dreamcast games, you don't even need to modify your console; just put it in and party like it's 1999!