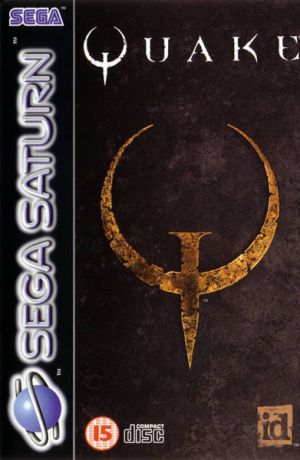 ID software invented the first person perspective blaster when they released Doom to the world. There may have been similar Sega Saturn games before but nothing could match the overall Doom package. it was the game that made the genre. And despite some senses shattering competition from Duke Nukem, arguably no-one ever matched the splendour of Doom 2. It took ID software to outdo themselves, with the release of the incredible Quake. Essentially, Quake is Doom with more realism. Better graphics (with stunning light-sourcing and shadows so real you can hide in them), more detailed monsters, a firmer grasp of the laws of physics, that's what Quake is all about. Oh, and mindless, rampant violence with high-calibre weaponry.

Surely the Saturn, a relatively underpowered console, couldn't hope to match the original? Well, yes it does in many ways. Lobotomy Software's know-how of console 3D is second to none. Their first game of the year, Duke Nukem 3D, raked in a massive 97%. It is quite simply the best game released in 1997. They can do things with the Saturn that nobody else can. Their reputation remains as impressive as ever with this Quake conversion. Upon loading the game up it's clear that Lobotomy have succeeded in bringing Quake's visuals to the home market. All of the lightsourcing and the deep shadows have been brought across with no problems at all, it would seem. The 3D engine runs at a blistering pace considering the agony it must be for the Saturn to produce visuals of this quality.

In addition to the secret areas cunningly hidden in each level, there are also a couple of secret stages to discover in the game. Although the PC original stages were quite cool (we especially liked the low gravity stage), lobotomy have ripped them out of the Saturn game, replacing them with stages of their own design. The results are pretty spectacular actually remember, Lobotomy know how to get the most out of their 3D engine - and seeing the guys able to flex their creative muscles with such an amazing technology makes you wonder just how stunning a Lobotomy designed Quake Mission Pack would be ... Oh well, we can dream, can't we?

In the past, games like Exhumed, Virtua Fighter 2, Sega Rally, Marvel Super Heroes, Panzer Dragoon Zwei and indeed Duke Nukem 3D have redefined what the Saturn is capable of graphically. And of all of them, Quake is perhaps the greatest technical achievement the Saturn has yet to witness. Couple that with excellent gameplay and you have what has to be an essential buy.