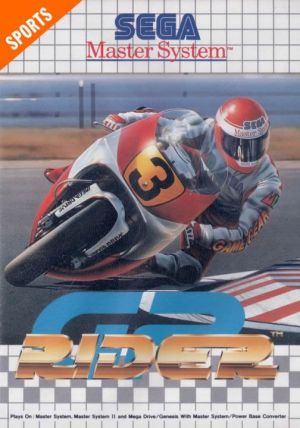 GP Rider is an arcade-style racing game for the Sega Master System. Originally released as a hugely popular arcade game in 1990, GP Rider soon found its way onto the Master System and Game Gear handheld in 1993. The quality of the conversion is considered to be excellent, with the Master System version benefiting from a slightly higher resolution.

Unlike many other racing games of this era, GP Rider features advanced computer intelligence in the form of the main opponent Wayne. Just like a human, there are times when he may crash or make mistakes, meaning an element of luck comes into the game. This kind of game-play mechanic was completely unique to anything else at a time when enemies were pre-programmed, making then possible to beat by merely studying their moves.

There are a couple of really cool music tracks, composed by the legendary Hiroshi Kawaguchi and Takenobu Mitsuyoshi. These include "Time Attack" for Automatic Transmission, "Be Over" for Manual Transmission and "The Perfect Power" when the course finishes and victory is celebrated.

For whatever reason this epic wonderous game gives me 90s vibes big time... It probably helps that it was published in the 90s I guess, but it really does make me want to wear a backwards cap and listen to Guns n Roses. The soundtrack is rockin' and the graphics whilst a little dodgy by today's standard hold up really well. GP Racer is where it's at dudes, don't be square and grab yourself a copy... Don't be left behind in the dust. Go on, I'll wait.
by Racquet Ralph 31st July 2013
Leave Review