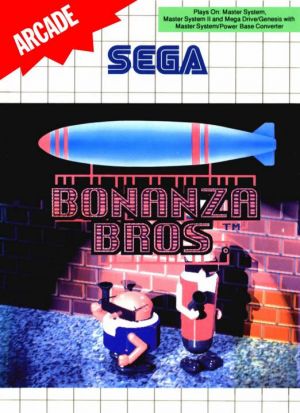 Sega are well known not only for putting out some incredibly forward thinking and technologically impressive titles, particularly within the arcade scene, but also for putting out a fair few incredibly unique and personality-packed titles that grew on those lucky enough to play them (before they sadly languished in obscurity). Bonanza Bros. is perhaps one of the quirkiest titles the company put out in the early 90s, particularly in terms of its visual design.

Players take on the role of either Mobo or Robo, two career criminals and master thieves, and are tasked with testing the limits of various security systems at places such as Museums, Cruise Liners, Mints, Mansions, and Art Galleries by the Police Chief of Badville, on threat of arrests themselves if they fail in their tasks. The means in which players accomplish this is through very early Stealth Based gameplay; though you do have a weapon, its range is rather limited and it is capable only of stunning enemies, so you must hide from them and wait for them to pass in most cases, so you can sneak on by and retrieve a variety of objects and treasures from each stage. Once you’ve obtained what you need, players must make haste to the rooftop, where a Blimp is waiting for them that will carry them to safety.

Despite the potentially gritty set up, the game is wholly comical and light-hearted in nature, featuring abstract and minimalist character designs that wouldn’t look out of place in a Duplo set. The two main characters also bear vague design similarities to the Blues Brothers, as portrayed by Jon Belushi and Dan Aykroyd, further amplifying the comedic nature of the game. This particular version of the game sadly lacks multiplayer support (something for which the original game was lauded for doing extremely well) but as a result, the playfield takes up a larger portion of the screen then in most other versions of the title.