A Bug's Life for PlayStation 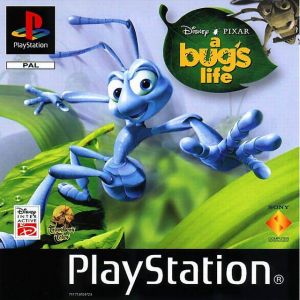 Experience 3D action adventure ant-style! Based on the eponymous film, you are Flik, the Edisonian ant who must protect the ant colony from marauding grasshoppers. Make new friends, complete tasks to possess seed tokens and launch attacks using a variety of berries to be found hidden at various levels. A golden berry can finish off an enemy permanently.

As Flik’s special skill lies in growing plants from those seed tokens, receive the advantage to jump, fly or be invincible as return gift from his leafy-pals. Cannon plant as the name suggests launches Flik to higher reaches. Think like an ant and be creative and improvise by using readily available items to proceed forward. Flik’s abilities are complemented by those of his friends, the circus bugs who prove valuable assets in the fight to the finish against the green monsters.

Floating telescopes act as indicators of areas of focus at several levels. March through 15 levels collecting an additional 50 grain pieces and even the letters that spell F-L-I-K. The grain machine collects grain as well as destroys enemies. Incredible Disney graphics make this arcade game a real treat.